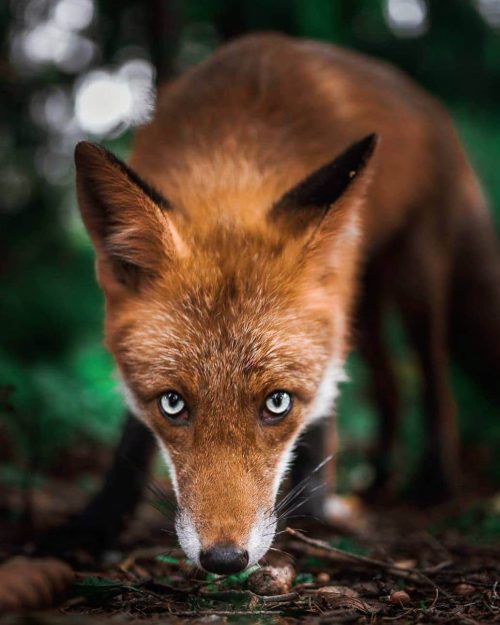 This post looks at how the fox is portrayed across cultures in folklore and myth, and how this has influenced language and literature.

The fox appears in the folklore of many cultures as a trickster with a double-identity, often with magic powers and the ability to transform. Its nature, cunning yet careless, inventive but destructive, is thought to embody the contradictions of the human character.

Possibly due to the creature dwelling in earths, the fox in folklore may be found on the threshold between worlds, either as a messenger of the gods, or a conductor of souls to the underworld.

In European folklore, the fox is always a male. He lies, he teases and entertains. He often has a subversive role, toppling those in power, such as the political or religious elite.

In East Asia, the fox is female, a seductress and a shapeshifter, changing from woman to fox or vice versa. The fox (called Kitsune) is the messenger of the Japanese (Shinto) goddess Inari, the goddess of plenty. In China, the fox may have up to nine tails.

In the Americas, the fox is variously a culture-hero, a wise and benevolent Creator god, or a thief and scoundrel.

In Africa, the fox is a trickster god and embodiment of chaos.

The noun fox is synonymous with someone who is clever, cunning. Applied to (mainly) women it denotes sex appeal. As a verb, fox means to trick, deceive, confuse or confound someone. It can also mean to cause paper or wood to become discoloured with reddish-brown spots. In Australian slang it means to pursue someone.

To outfox is to outwit, and outdo in deception or cunning.

Fox rain is a sunshower, also known as a fox’s wedding in parts of Korea and Japan, and has its own folklore.

Fox fire is the bioluminescence of decaying wood, caused by various fungi.

The word shenanigan (mischief, or a confidence trick) is thought to be derived from the Irish expression sionnachuighim, meaning ‘I play the fox’.

The English word fox is of Germanic origin fuchs, which stems from bushy and tail. In many other languages, the word fox is also derived from tail.

If you combine all those mythologies and meanings and apply that to a writer’s role, so writers are tricksters, entertainers, liars, they can shift gender easily if they want to, they deal with the humans cheating, but also they are the lowest kind, they are always presented as lonely creatures.

Dubravka Ugrešić (Between the Covers, 1 October 2018)

Since Aesop’s Fables (600 BCE), writers around the world have been inspired by fox myths and folklore.

Below is a selection of modern stories in which the fox plays the lead: