Myth and mysogeny: how we are shaped by the stories we tell.

Oyeyemi’s anti-hero is a 1930s writer, Mr Fox, with the habit of killing off his heroines. When one of his characters, Mary Foxe, steps from his pages to question his motives, a writing duel ensues. His wife, Daphne, is jealous of Mary but later comes to an understanding with her.

The book is a series of stories within stories, of stories starting over, told from different perspectives, and stories refracted as a ‘trick of mirrors’. It is easy to get lost in Oyeyemi’s world, but what a world to get lost in? Carnivalesque, full of wit and such sumptuous prose, it guides us to re-examine what we take for granted. This is an exceptional talent.

With her trademark for reimagining fairytale characters, Oyeyemi’s fourth novel inverts the sophisticated and murderous Mr Fox (a.k.a. Bluebeard, Reynardine, Fitcher’s bird, the Robber Bridegroom), who seduces young women while the skeletons of previous brides clutter his lair.

Tales and myths from other cultures are woven into this folklore trope. Through them, Oyeyemi illustrates our perception of gender differences, the constraints we impose, and how the words we use influence these perceptions and constraints. So, where the tricksy and cunning folklore fox might be a foxy male in Western culture and a seductive temptress in the East, Oyeyemi has the fox rip the word ‘fox’ from the dictionary in a bid to become more human.

Mr Fox is a battle of the sexes. It is at once an exploration of what it means to be masculine in society – one story tells of a finishing school, in which young men are taught practical skills such as Strong Handshakes, Silence, and Explosive Displays of Authority – and a comment on how female characters are portrayed by male writers. When Mr Fox fictionally beheads one character, he is called out on it by Mary Foxe ‘What you’re doing is building a horrible kind of logic’.

Not a book to read on cruise-control, but it does repay close attention.

SECOND HELPING: I found so many gems that escaped me during the first reading, such as the philosophy of de Silentio and the misogeny of the Enlightenment era. It remains a challenging read, and I suspect there is still more to be mined.

[A note on the cover (photo of woman in faux-male attire): What was the publisher thinking?] 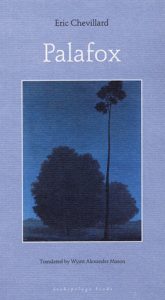