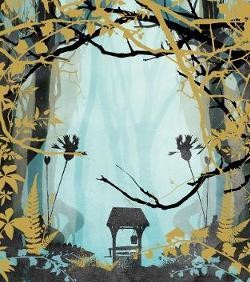 Days before his release from prison, Shadow’s wife, Laura, dies in a mysterious car crash. Numbly, he makes his way back home. On the plane, he encounters the enigmatic Mr Wednesday, who claims to be a refugee from a distant war, a former god and the king of America.

Together they embark on a profoundly strange journey across the heart of the USA, whilst all around them a storm of preternatural and epic proportions threatens to break.

The Good People by Hannah Kent

Nóra, bereft after the sudden death of her beloved husband, finds herself alone and caring for her young grandson Micheál. Micheál cannot speak and cannot walk and Nóra is desperate to know what is wrong with him. What happened to the healthy, happy grandson she met when her daughter was still alive?

Mary arrives in the valley to help Nóra just as the whispers are spreading: the stories of unexplained misfortunes, of illnesses, and the rumours that Micheál is a changeling child who is bringing bad luck to the valley.

Nance’s knowledge keeps her apart. To the new priest, she is a threat, but to the valley people she is a wanderer, a healer. Nance knows how to use the plants and berries of the woodland; she understands the magic in the old ways. And she might be able to help Micheál.

As these three women are drawn together in the hope of restoring Micheál, their world of folklore and belief, of ritual and stories, tightens around them. It will lead them down a dangerous path, and force them to question everything they have ever known.

You Let me in by Camilla Bruce

Two ways of looking at the same story: Casandra Tipp is either the vengeful victim of child abuse or she is away with the fairies (quite literally).

Sadly mis-sold as a standard plot about a missing author who has got away with murder.

The remote island village of Neverness is a world far from our time and place.

The air hangs rich with the coconut-scent of gorse and the salty bite of the sea. Harsh winds scour the rocky coastline. The villagers’ lives are inseparable from nature and its enchantments.

Verlyn Webbe, born with a wing for an arm, unfurls his feathers in defiance of past shame; Plum is snatched by a water bull and dragged to his lair; little Crab Skerry takes his first run through the gorse-maze; Madden sleepwalks through violent storms, haunted by horses and her father’s wishes.

The Seas by Samantha Hunt

In a remote northerly fishing town, a father tells his eight-year-old daughter she is a mermaid, before he walks into the sea, never to return. The daughter, now 19, is an outsider in her community. She forms an obsessive attachment to Jude, a damaged alcoholic, which leads her to jail.

Hunt’s lyrical debut delves into the mind of a character unravelling.

Tyll Ulenspiegel, the subversive hero of German folklore, is made flesh and blood in this historical fiction set during the Thirty Years’ War.

MYTH: Dream Angus, the Celtic god of love, youth, beauty, and the bringer of dreams.

From the perspective of those who live in Herot Hall, the suburb is a paradise. Picket fences divide buildings—high and gabled—and the community is entirely self-sustaining. Each house has its own fireplace, each fireplace is fitted with a container of lighter fluid, and outside—in lawns and on playgrounds—wildflowers seed themselves in neat rows. But for those who live surreptitiously along Herot Hall’s periphery, the subdivision is a fortress guarded by an intense network of gates, surveillance cameras, and motion-activated lights.

For Willa, the wife of Roger Herot (heir of Herot Hall), life moves at a charmingly slow pace. She flits between mommy groups, playdates, cocktail hour, and dinner parties, always with her son, Dylan, in tow. Meanwhile, in a cave in the mountains just beyond the limits of Herot Hall lives Gren, short for Grendel, as well as his mother, Dana, a former soldier who gave birth as if by chance. Dana didn’t want Gren, didn’t plan Gren, and doesn’t know how she got Gren, but when she returned from war, there he was. When Gren, unaware of the borders erected to keep him at bay, ventures into Herot Hall and runs off with Dylan, Dana’s and Willa’s worlds collide.

The Assembly of the Severed Head by Hugh Lupton

A small monastic outpost in 13th Century Wales is rocked to its core when a gruesome discovery is made on the nearby shoreline: a severed human head. It’s the first of several to wash up along the surrounding coast, and not long after, the holy brothers stumble across the smouldering ruins of a bardic school with a pile of decapitated bodies inside. Only one survivor, barely alive, is found hiding nearby.

He is Cian Brydydd Mawr, the greatest bard of his age, who holds in his head the four ‘branches’ of an ancient, epic Welsh myth cycle: The Mabinogion. Physically weak but strong willed, he asks the monks to put aside their rigid Christian doctrine and commit his tales (which they see as pagan relics) to parchment. It takes the intervention of a king to persuade them. And as the old poet tells his tales of spirits and shape-shifters, spells and curses, passion and vengeance, no-one in his audience will ever be the same again.

Dead Papa Toothwort is awake. He is listening to a twenty-first-century village, to his English symphony. He is listening, intently, for a mischievous, enchanting boy whose parents have recently made the village their home. Lanny.

Water Shall Refuse Them by Lucie McKnight Hardy

The heatwave of 1976. Following the accidental drowning of her sister, sixteen-year-old Nif and her family move to a small village on the Welsh borders to escape their grief. But rural seclusion doesn’t bring any relief. As her family unravels, Nif begins to put together her own form of witchcraft – collecting talismans from the sun-starved land. That is, until she meets Mally, a teen boy who takes a keen interest in her, and has his own secret rites to divulge.

The Bloody Chamber by Angela Carter

Harriet discovers her coeliac, teenage daughter, Perdita, unconscious in her bedroom surrounded by gingerbread – and her distraught dolls.

While keeping vigil, Harriet tells Perdita the story of her childhood and how she came to the UK with her mother, Margot, from Druhástrania, ‘an alleged nation state of indeterminable geographic location’.

These books are available to buy from my Affiliate page at Bookshop.org.

If you liked this, check out my list of Greek myths in contemporary fiction.