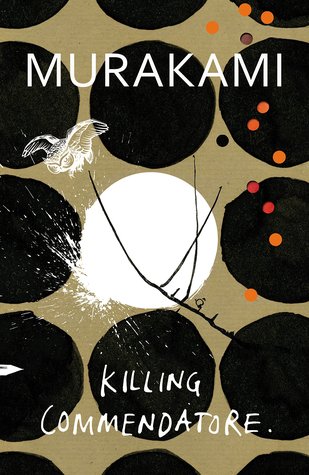 A male thirtysomething artist at a crossroads in his life discovers a painting in the attic. A bell mysteriously rings in the woods in the dead of night, always at the same time. Then, one by one, characters from the painting make an appearance.

This has everything (bar the cat) that one might expect of Murakami: food, music, sex – outlandish sex at that, and lots of it – supporting female characters with their own agenda and stories within a story. Beyond that, the novel forms an homage to The Great Gatsby, and a commentary on war, male friendship and the creative process.

Murakami uses magic realism to explore the workings of the subconscious. Repetition, lengthy and frequent, reflects how memory often operates: not all at once, but the kernel of a memory is added to over time. Numerous plotlines wander around in their own good time, and aren’t always resolved.

As a British English reader, the Americanisms peppering the translation by Philip Gabriel and Ted Goossen grated on me.